[2] The End of the Ocean by Maja Lunde 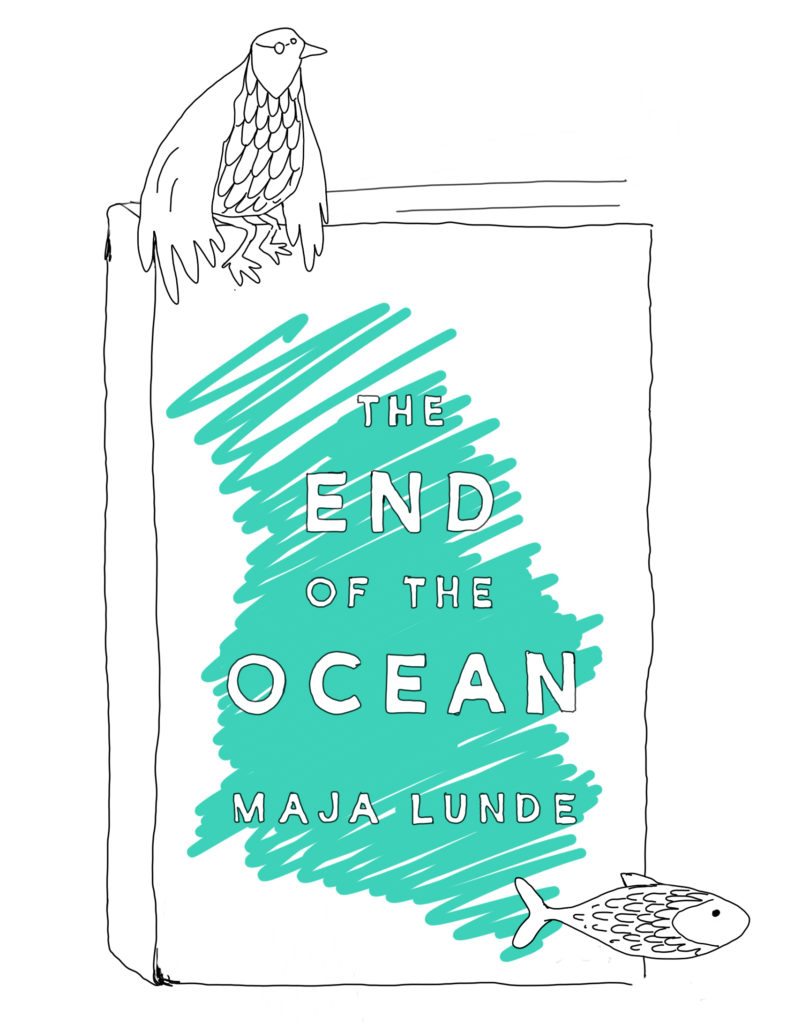 SUMMARY
It is 2017 when seventy-year old Signe sets off in a sailboat across the ocean in search of her lost love. In 2041, we meet David and his daughter Lou. They are fleeing drought-ridden and war-torn Southern Europe. In a garden in France far from any shore, they discover Signe’s sailboat and personal belongings.

The second book that we will be reading together in the LAX LAB book club is Norwegian author Maja Lunde’s recently translated novel The End of the Ocean (Blå for those who prefer to read in the original Norwegian). Maja Lunde’s novel is a multi-generational story. It weaves together sets of characters and different points in time and imagines a not-so-distant future in which climate change has led to water scarcity and geopolitical instability. Speculative and dystopian, The End of the Ocean is also a call to action.

The End of the Ocean is the second book in Maja Lunde’s ‘Climate Quartet’, a series of independent but linked novels about connection, nature, and climate change. In an interview with Amy Brady for The Chicago Review of Books, Maja Lunde says the following about the book:

‘The End of the Ocean was written out of gratitude. Being Norwegian means being able to live surrounded by water in any form, wild waterfalls and tranquil lakes, majestic glaciers and pristine snow, and of course the fjords and the ocean. It also means being able to turn on the tap and fill a glass of fresh, clean drinking water. This is a true miracle. But a miracle available to very few, and ever fewer. Our freshwater resources are emptied, the glaciers are melting before our eyes, while the world is getting drier and warmer every year. Therefore, the novel also originates from my own anxiety. In Norway we say “write where it burns.” This is where it burns for me.’

In The End of the Ocean, author Maja Lunde humanises the causes and impacts of climate change. The author does this by alternating two narratives: that of seventy-year old Norwegian environmental activist Signe and that of David and his young daughter Lou who are two French climate refugees. Through Signe’s reminiscing, we see the early natural resource development that helped build the welfare state in Norway, the birth of Norwegian environmentalism, and the beginnings of environmental and climate change. In David and Lou’s story set in 2041, we see the more dramatic consequences of climate change: extreme drought, desertification and fire, food and water scarcity, geopolitical instability, mass migration and climate refugees.

To inspire our discussions, I offer the following two provocations.

Provocation 1: A call to action

Environmental crisis and the impacts of climate change are often othered and distanced in both space and time. Climate change is frequently spoken of as something that happens somewhere else and sometime later. Developing countries paying the price of the developed world's actions is a common narrative. Instead, The End of the Ocean alternates between Norway and Southern France and is thus Eurocentric in its explorations of climate change. We are also pulled back and forth between two times, our present and a possible future. In this way, this book explores the intergenerational dimensions of climate change, making connections between our actions and their devastating though delayed consequences. This book can also be read as a call to action. At seventy-years old, Signe questions the impact of her actions and lifelong dedication to environmental activism. Upon reuniting with her former love Magnus, she speculates that her activism ‘hasn’t done any good’. Magnus replies in earnest, ‘you don’t know how the world would have been if you’d refrained’ (Lunde, p.283).

How might this book be considered a call to action?

Has Signe’s environmental activism done any good? In what ways has she failed or succeeded?

How might the Eurocentric and Nordic focus be intentional or essential to the story?

Provocation 2: Holding two thoughts at once

On the 18th of June 2020, executive director of the International Energy Agency Fatih Birol stated that we have six months to avert the climate crisis and avoid a post-lockdown increase in greenhouse gas emissions. As individuals, societies, and governments, we know what is happening, know the devastating impacts of climate change, and know what must be done to address it. Yet we do not act. Akpan (2019) writes that ‘making the future tangible is only one of the psychological barriers that have made climate change into an elusive problem’. Cognitive dissonance is another. Cognitive dissonance is the theory that we may simultaneously hold opposing views, that we may think one way but act in another, contradictory way. Cognitive dissonance is a theme throughout this book, perhaps best embodied by Magnus. Magnus sees both the ugliness of the hydroelectric development and its beauty as a symbol of grandeur, progress, and of lifting Norway out of poverty. Magnus believes that it must be possible to hold two contradictory thoughts at once. Dissonance can also be felt in Lunde's frequent use of juxtaposition: righteous activist Signe against capitalist Magnus; Signe’s environmentalist father against her entrepreneurial mother; past against future; youth against age; ice and water against drought and fire.

How are elements juxtaposed in these stories, either between or within the two narratives?

How can we hold two contradictory thoughts at once?

Given all that we know, why don’t we act on the climate crisis?

'Climate fiction for climate action: An interview with Maja Lunde, author of 'The End of the Ocean'
Amy Brady, The Chicago Review of Books, 21 January 2020