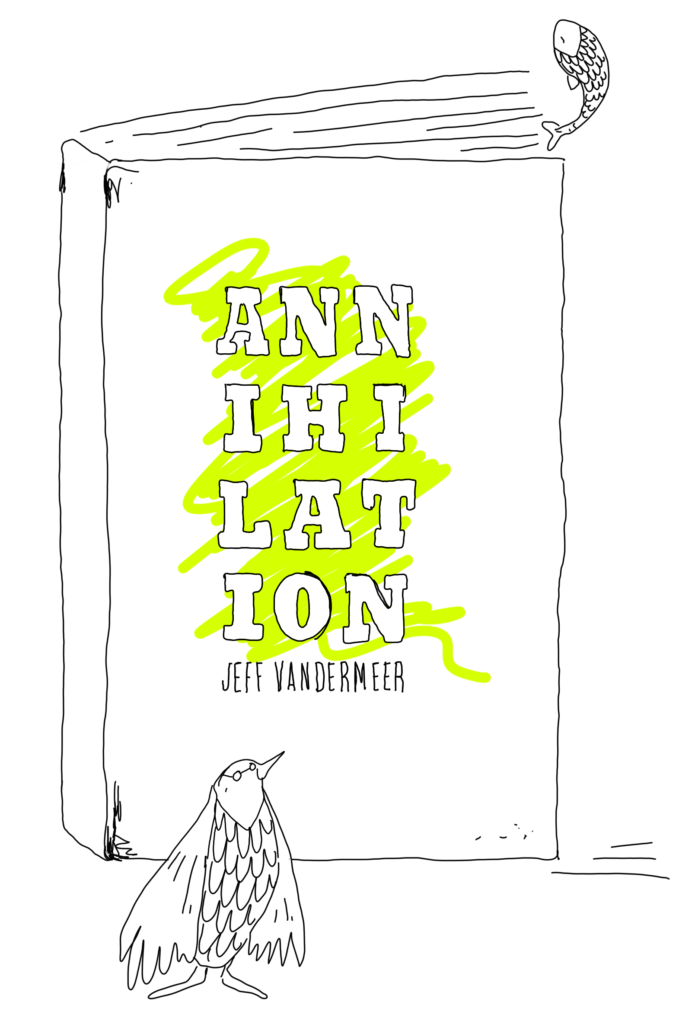 SUMMARY
Welcome to Area X. This exclusion zone along a stretch of coastline is a mysterious place where pristine nature has inexplicably taken over. Here, unruly nature is quarantined. We are joining the twelfth expedition – a biologist, an anthropologist, a surveyor, and a psychologist – on a government mission to explore and chart the mysteries of Area X.

The first book that we will be reading together in the LAX LAB book club is Jeff VanderMeer’s Annihilation (2014). It is the first book in the author’s Southern Reach Trilogy. Through this atmospheric and unsettling novel, we will be exploring the unknown, the uncanny, our relationship with science, and the mysteries and power of nature. Perhaps some of these themes may take on new meanings in our present moment, also full of unknowns, spaces unsafe, and areas of exclusion. And of nature taking over!

The books we will be exploring together in the LAX LAB book club do not all necessarily fall into the genre of climate fiction. They also include science fiction, speculative fiction, and other works that defy genre. Jeff VanderMeer’s writing certainly touches on multiple genres and often includes environmentalist themes and references to climate change. In this short animated video made by The Atlantic, the author describes his work in connection to climate change and notes that there are always elements of hope in his work as well.

Annihilation is one of those novels that leave the reader with more questions than answers. Some of these questions relate directly to the plot of the book. What really happened at Area X? Does anyone ever truly leave? Why does the narrator refer to 'the tunnel' as 'the tower'? The novel may also provoke deeper questions, prompting the reader to reflect on a range of issues from the scientific method to our relationships with nature and with each other.

To inspire our discussions, I offer the following two provocations as departure points.

Wild Kashmiri mountain goats descend into the seaside town of Llandudno in Wales. They snack on hedges, walk the empty streets, rest in abandoned grassy spaces. Fish-eating birds return to Venice, coyotes roam the streets of San Francisco, the sounds of nature return to cities in bird songs and the hum of insects. Nature reclaiming space is one of the emerging narratives from the Covid-19 crisis, though not all environmentalists are convinced that these stories are useful. Nature taking over is also a major theme in the novel Annihilation by Jeff VanderMeer. Our narrator the biologist is unsure whether the spreading borders of Area X is ‘a bad thing’, particularly not ‘when looking at the pristine nature of Area X and then the world, which we have altered so much’ (VanderMeer, p.193).

What do you think about the ‘nature reclaiming cities’ narrative?

Provocation 2: Transforming text and the power of words

Jeff VanderMeer’s writing has been characterised in different ways, from speculative fiction to eco sci-fi. In a review for the Southern Reach Trilogy, of which Annihilation is the first book,Rothman (2015) suggests that the books are ‘experiments in psychedelic nature writing’. In the novel Annihilation, text plays an important and mysterious role. The journals that expedition members write in are referred to repeatedly while the cryptic organic messages written by ‘The Crawler’ are never quite explained. The biologist tries to make sense of the different texts she encounters: the pile of journals in The Lighthouse, the phrases uttered by the psychologist to induce hypnosis, and the ‘script of words’ written in the tunnel which she believes ‘powers the engine of transformation’ (VanderMeer  p,191).

What are your interpretations of the different texts encountered in Area X?

How can stories help us understand our past and imagine different futures?

Television and film
Annihilation (2018), written and directed by Alex Garland